Hello everyone, It’s me Omar!

The sense of liberty of experiencing the mighty Sahara Desert attracts travelers from all over the world.

Although Morocco is well-known for its 3416 km of Mediterranean and Atlantic coastline, one important geographical detail is that the desert covers a large part of the country.

Due to length, the route Fes-desert-Marrakech or Marrakech-desert-Fes takes a few days to overcome.

Taking this into consideration, many people decide to visit the Sahara Desert on a single trip departing from Fes.

Consequently, it is convenient to start in Fes and end in Marrakech, or, the other way around, staring in Marrakech and ending in Fes.

Many of the best places to visit in Morocco are included on my desert trips.

Fes Medina in Morocco is considered the largest urban area in the world without car traffic, and the preservation of its historic center’s architectural heritage made its historical center the first choice of UNESCO in Morocco for the list of World Heritage Sites.

Photo gallery with the destinations you will visit by order of arrival. Click on the images.

The options for Fes to Marrakech desert tours

Best sections of the Fes to Marrakech desert tours by order of visit.

Click on the Fes to Marrakech desert tours to open with detailed information. 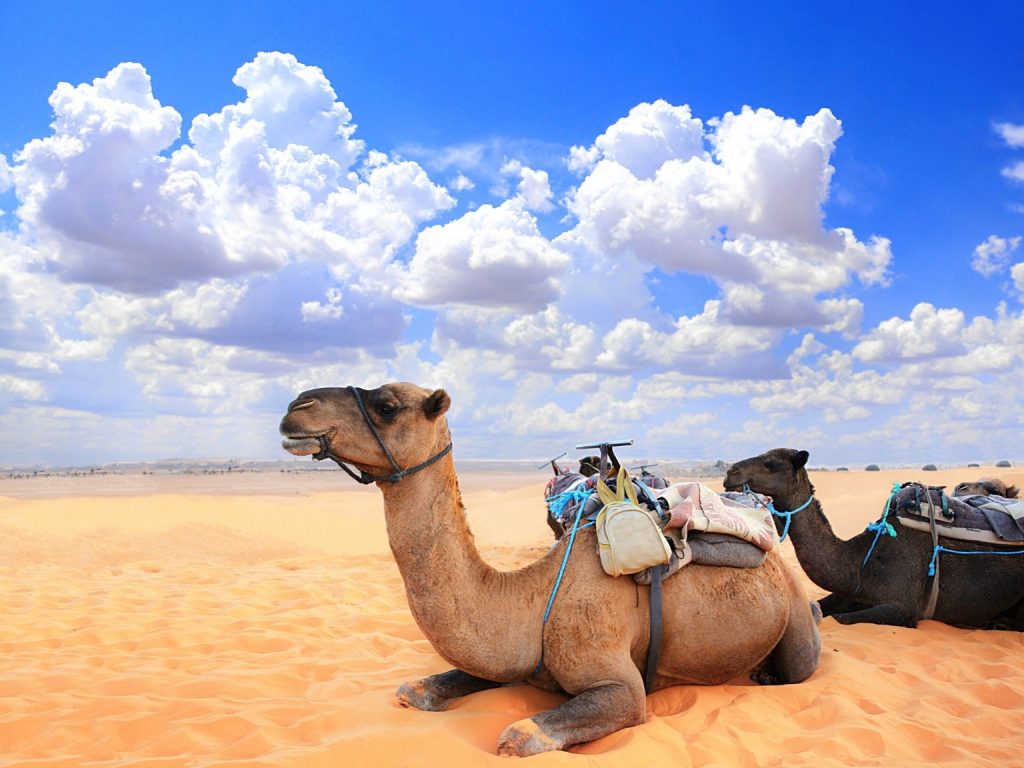 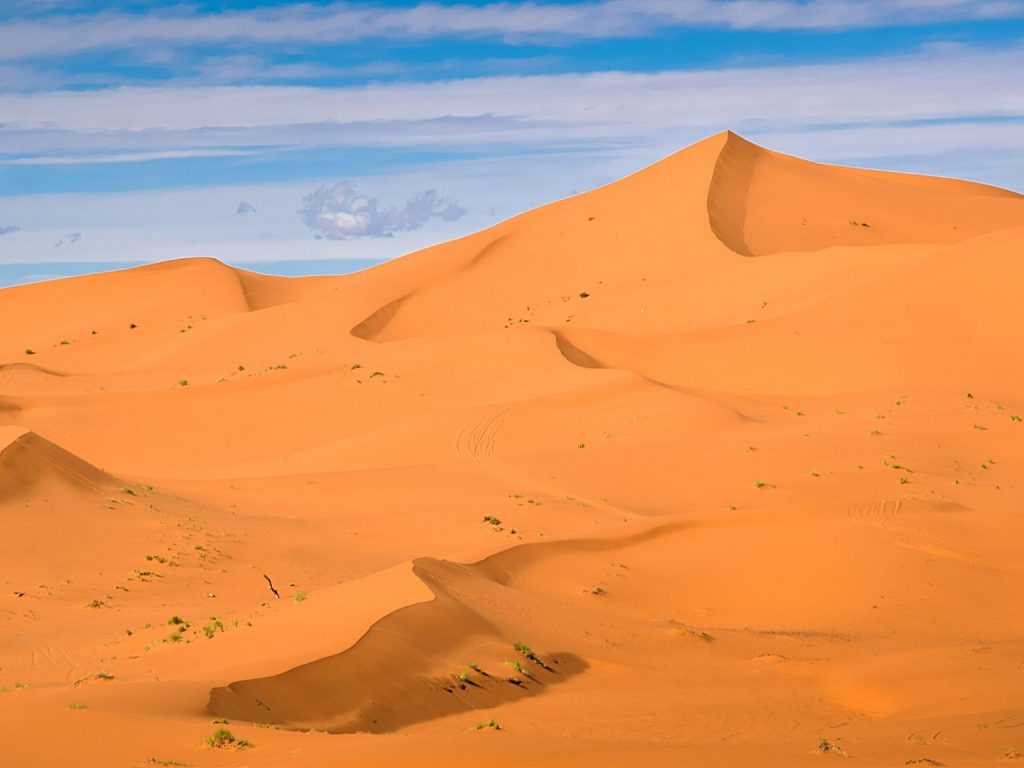 Visiting Fes will be one of the most interesting experiences on any trip to Morocco.

The city has the largest medinas in Morocco, this being one of the nine sites in Morocco that are classified by UNESCO as a World Heritage Site.

In Fes, you will find a combination of architectural elements of high historical value, an environment that takes us to the essence of Moroccan culture, great restaurants, and markets full of color and aromas.

Another advantage of Fes is its central position allowing you to move to other parts of the country with great ease and, using the city as a base, to explore quite exciting places that are close by.

Since you will be traveling in one of my Fes to Marrakech desert tours, I now make a small travel guide to Fez, so that you can organize your stay before heading to the desert.

The Fes tanneries and their colorful tanks are a symbol of Fes and one of the most sought attractions in the city, despite the intense smell. The largest of these workshops is called Chouara. It has been active without interruption since the 16th century. To observe the skills of the craftsmen in action and the general panorama of the workshop, you have to enter one of the buildings that surround the enclosure.

Kairaouine Mosque was originally built in the middle of the 9th century and expanded in the 12th century, now being able to receive 20 thousand believers. It is one of the largest mosques in Africa. In addition to the temple, there is a school focused on teaching classical Arabic and theology, supported by a historic library. Unfortunately, only Muslims will be able to visit its interior, as with almost all mosques in Morocco. However, you can have a glimpse of its patio standing in the front door.

Madrasa Bou Inania was built in the middle of the 14th century and it is the most elaborated of all the religious schools in the city. The gates overwhelm immediately, followed by a courtyard richly ornamented with mosaic, carved wood and worked stucco. The white marble columns and the minaret of the adjacent mosque, decorated with green mosaic, are impressive.

Madrasa el Attarine is an ancient religious school connected to the Kairaouine Mosque. It was created in the first half of the 14th century and today we can appreciate its interior, where the decorative works of mosaic and wood and carved stucco stand out.

The Jewish neighborhood of Fes was instituted by the order of Sultan Ar Rashid, in 1438. It came to be populated by 250 thousand Jews. Nowadays the small Jewish community that still resides in Fes has moved to the new part of the city but the neighborhood maintains features that testify its presence in the past. In the main street of Merinides, there are unusual balconies, which can only be seen there. Ironically, the wealthiest houses are now in an advanced state of degradation and are occupied by poor families.

Fes Royal Palace was originally built in the 13th century, including a tunnel that connected the palace to the Grand Mosque, allowing the sultan to travel to the house of prayer without exposing himself to the crowd. After a period of abandonment, the palace was restored by the Alawi dynasty in the 17th century. Unfortunately, the Royal Palace is not open to the public, but its exterior is so beautiful that it still deserves a visit. The huge golden gates immediately attract attention but keep in mind that photographs are strictly prohibited.

Borj Nord is a beautiful fort that stands on a hill just north of the Fez medina. It was built in the 16th century based on Italian models of military architecture. It was part of a defensive ring built around the city and still, today is in a perfect state of preservation. Borj Nord hosts a military museum, the first in the country, with a rich and well-organized collection. Even if you are not interested in the theme, the panoramic views of Fes justify a visit.

All the medina gates are impressive, but if you can only see one or just want to see one, then choose Bab Bou Jeloud to the west of the medina. The original gate dated back to the 12th century, but it has not stood the test of time and what we see there today is a new version constructed in 1913. Bad Bou Jeloud gives access to the main market in Fes, the souq, Tala’a Kebira, and the Kairaouine mosque complex.

As in other cities in Morocco, there was a large Jewish community in Fes and as a testimony to this, we find today an interesting Jewish cemetery which is one of the oldest in the country. At one corner of the enclosure there is the Habarim synagogue, today transformed into a museum with artifacts linked to the history of the community and many old photographs.

The Merinid Tombs are located at the top of one of the hills that surround the medina of Fes. There lie the remains of a series of sultans from the Merinid dynasty, who reigned in Fes between the 13th and 15th centuries. The tombs have suffered over the centuries and are in a semi-ruined state. Most of the decorative motifs have been erased by the weather, but even so, it is a very mysterious place and from where you have great views over the immensity of the medina of Fes.

Dar Batha is a palace in the medina of Fes built in the 19th century by Moulay el Hassan. It was converted into a museum in 1915. Its collection consists mainly of traditional artifacts, but it displays some objects of applied arts. In addition to tapestry, carved wood, and mosaics, the 14th-century pottery collection stands out. The interior courtyard is charming, revealing the Andalusian influence by having a center fountain.

Fes can be easily visited during the whole year. The best time to visit Fes will be before the hot summer months arrive, between March and May. In winter the weather is generally dry but the cold can be intense.

How to get to Fes

Fes international airport is used by several airlines. Ryanair offers a series of routes between European cities and Fes and Royal Air Maroc provides domestic connections. It is very simple to travel between the airport and the city center, with constant buses.

moroccoholidaytour@gmail.com
Facebook-f
Private Marrakech desert tours with 4X4 and guide for the best holidays in Morocco.
© 2020 Holiday Morocco Tours
Open chat
Powered by
Hello, I'm Omar, and I'm here to help you book your trip to Morocco. How can I help?
We use cookies to ensure that we give you the best experience on our website. If you continue to use this site we will assume that you are happy with it.Ok