Hello everyone, It’s me Omar!

The sense of liberty of experiencing the mighty Sahara Desert attracts travelers from all over the world.

Although Morocco is well-known for its 3416 km of Mediterranean and Atlantic coastline, one important geographical detail is that the desert covers a large part of the country.

Due to length, the route Marrakech-desert-Fes or Fes-desert-Marrakech takes a few days to overcome.

Taking this into consideration, many people decide to visit the Sahara Desert on a single trip departing from Marrakech.

Consequently. it is convenient to start in Marrakech and end in Fes, or, the other way around, staring in Fes and ending in Marrakech.

Many of the best places to visit in Morocco are included on my desert trips.

The historic center of the Medina Marrakech in Morocco has considerable patrimonial wealth, and the city played an essential role in the development of urban concepts from the Middle Ages. Occupying 700 hectares, the medina of Marrakech is a testament to an ancient city that has maintained customs and traditions.

Photo gallery with the destinations you will visit by order of arrival. Click on the images.

The options for Marrakech to Fes desert tours

Best sections of the Marrakech to Fes desert tours by order of visit.

Click on the available Marrakech to Fes desert tours to open with detailed information. 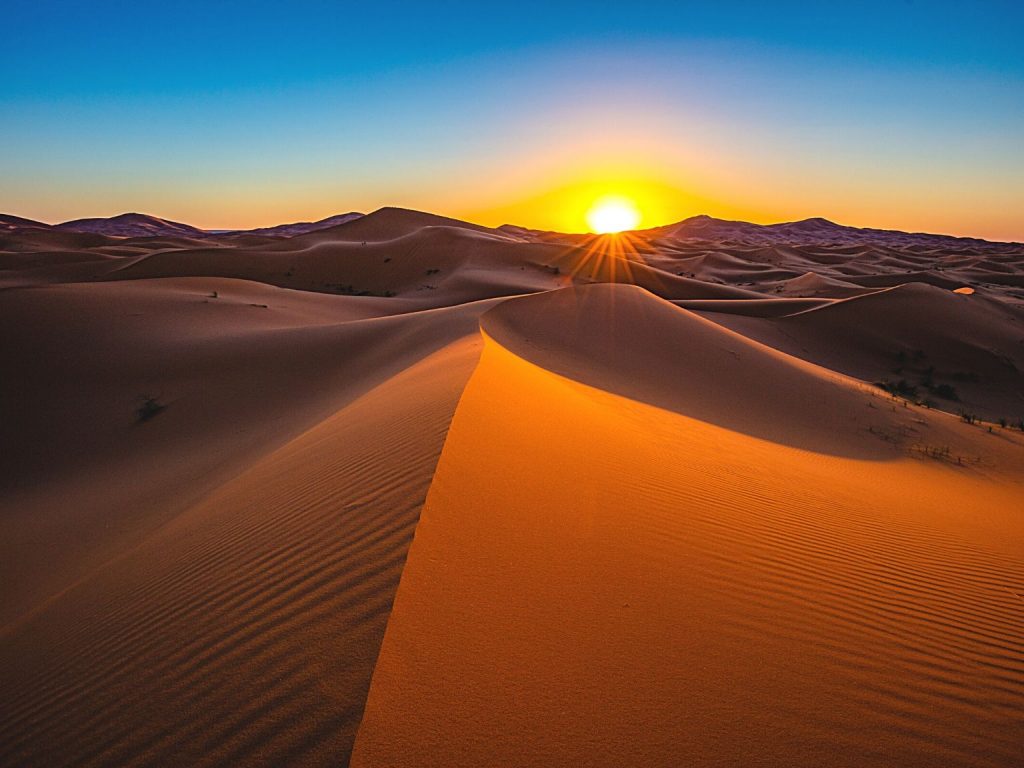 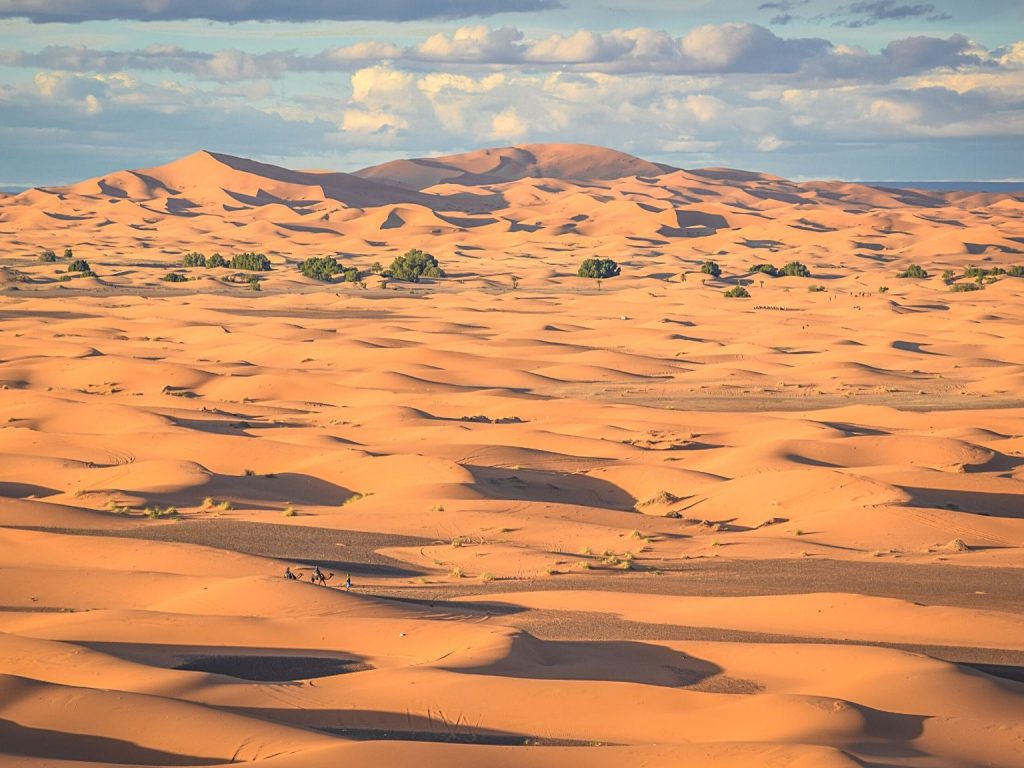 Visiting Marrakech will be one of the most interesting experiences on any trip to Morocco.

Marrakech is one of the most popular Moroccan cities for tourists visiting the country. In reality, going to Morocco without visiting Marrakech is not suggested as part of the Moroccan soul will be neglected.

Marrakech, known as “the red city” due to the dominant color of its buildings, offers all modern amenities to the traveler. At the same time, you can dive into the ancient Marrakech medina and feel like you are traveling back in time.

In the old medina of the city, you will find markets that will not be very different from what they were several centuries ago. You can expect magnificent palaces, medieval mosques, madrasas, fascinating alleys, and secret corners.

The old town revolves around the mythical Jemaa El Fna square. This is an ample public space animated by artists, storytellers, snake charmers, vendors, dancers, and at night, a lot of food.

Since you will be traveling in one of my Marrakech to Fes desert tours, I now make a small travel guide to Marrakech, so that you can organize your stay before heading to the desert.

The famous Jemaa El Fna square is the biggest attraction in the city. It is here that all visitors and many locals come, in search of animation and spectacle. Throughout the day, the activity intensifies.

The snake charmers, the storytellers, and the women who read the future or make hand henna tattoos. Boxing matches are organized, traditional dentists practice their craft and orange juice sellers do business. As the night falls, improvised restaurants are set up and the crowd thickens. All of this is an unforgettable human show.

Koutoubia Mosque is located outside the medina and is characterized by its elevated minaret. Throughout the centuries, the structure functioned as a kind of desert lighthouse. The mosque tower can be seen in the distance by travelers and caravans that were heading for the city. Although it seems relatively recent, it dates back to the 12th century.

This building is a typical example of Almohad architecture. Next to the mosque, you can see the structures that remain from a previous building. They date from the beginning of the 12th century. Note that as with almost all mosques in Morocco, only Muslims can visit its interior.

Bahia Palace is an urban palace. Here, visitors can easily imagine the life of a wealthy Moroccan in the 19th century. Bahia Palace is in an excellent state of conservation.

One can witness the ornamental details in the rooms and outdoor spaces. Si Moussa Ba Ahmed, the vizier of the sultan, built this palace for his personal use and multiple wives.

Saadian tombs were discovered in the early 20th century and are associated with the Saadian dynasty. They are the only vestige of this specific dynasty that ruled Marrakech between 1524 and 1659.

Sultan Moulay Ismail, who took the throne, did not dare to destroy the tombs, as he did with all the structures associated with its predecessors. Consequently, the entrance to the tombs remained sealed and today you can visit the place that has remained untouched for centuries.

The Badii Palace was built in the 16th century by Sultan Ahmed Al Mansour. It was destroyed a few decades later by the new Sultan, Moulay Ismail. The capital was transferred from Marrakech to Meknes. The sultan took with him all the noble materials to build the new capital.

El Badii Palace can be visited, but the splendor of the old palace is not much left. The visitor will be able to see some traces of its structure and visit some art and history exhibitions. It is possible to see, with the help of computer means, a reconstruction of what would be the palace in its golden age.

Majorelle Gardens are located in the Guéliz neighborhood of Marrakech. The gardens were created in 1923 by Jacques Majorelle and Pierre Bergé. These are big names in world fashion in the second half of the 20th century.

In addition to the tranquility of the gardens, famous for their cactus collection, the visitor will be able to see the Berber Museum.

Tiskiwin Museum is based on the private collection put together by the Dutch anthropologist Bert Flint. He still lives in the house. Tiskiwin museum is located on one of the streets in the medina. In addition to the beautiful collection on display, it has a very pleasant patio, ideal for relaxing in tranquility.

Throughout countless small rooms, the visitor discovers the exhibits. Almost all of them were collected by the investigator during an adventurous trip he made in Africa. From traditional clothes and decorative elements, agricultural implements, jewelry, there is a little bit of everything there.

It is a museum that, although not large, has a great wealth of heritage. One can benefit from the almost domestic atmosphere in which the exhibition is located.

Dar Si Said house-museum is located in the medina of Marrakech. Here lived Si Said, brother of the great vizier of Marrakech, Bou Ahmed. The visit to the interior of this ancient palace itself would be worth the visit. Whoever goes there will be able to observe an interesting collection of ancient objects.

The exhibition spans the two floors of the complex. There you can see old weapons, clothes, pieces of jewelry, musical instruments, and many other artifacts of daily use.

Marrakech can be easily visited during the whole year. Those most sensitive to heat may want to avoid to visit Marrakech in the peak of summer.

How to get to Marrakech

Getting to Marrakech couldn’t be simpler. Marrakech international airport is located just a few kilometers from the center. It has routes that connect it to many of the main European cities. Marrakech is connected to the country’s rail network, with direct trains from Casablanca, Rabat, and Tangier.

moroccoholidaytour@gmail.com
Facebook-f
Private Marrakech desert tours with 4X4 and guide for the best holidays in Morocco.
© 2020 Holiday Morocco Tours
Open chat
Powered by
Hello, I'm Omar, and I'm here to help you book your trip to Morocco. How can I help?
We use cookies to ensure that we give you the best experience on our website. If you continue to use this site we will assume that you are happy with it.Ok